Tokyo Ghoul episode 6 opens with Touka taking a bite out of Kaneki. Tsukiyama reacts in shocked jealousy because he wanted to be the only one to eat him. He attacks but is easily fended off. Touka counterattacks with her kagune, which comes in the form of fiery crystal shards. She can even throw the shards as a rain of projectiles. Tsukiyama takes significant damage, but it isn’t enough. He heals right away and prepares to attack. His kagune is in the form of a flexible blade. They spar back and forth until Tsukiyama is put on the run. He decides to attack Kimi in order to take a bite, but Nishio grabs him midway. Before he can shake him off, Touka attacks again, slicing off his arm. He doesn’t act defeated, but Touka finishes him off after a few moments. 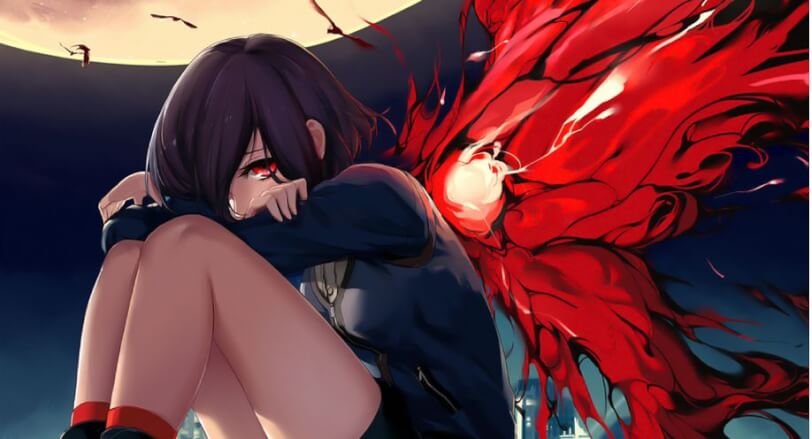 Afterwards, Nishio limps towards Kimi to see if she is okay. Touka approaches from behind and activates her kagune. The two men are surprised, but she says that a human who knows too much about all of them has to die. Nishio protects Kimi from a barrage of crystals with his body. Kaneki tells her to stop because Kimi is to Nishio as Hide is to him or Yoriko is to her. Thankfully, with her blindfold now off, Kimi has a chance to see Touka. She calls her “beautiful,” which causes Touka to run off. Atop a building somewhere, she wonders how she can be called beautiful.

Back at the hospital, the father bursts through the back wall and slides outside. Amon and Mado, the Doves, are waiting for them there. They recognise Jason right away and take out the weapons in their suitcases. The texture, colour and shifting motion of the weapons seems strongly similar to ghoul kagunes. On the attack, Mado is much faster and more proficient than Amon, but Jason is faster than both. Still, the human’s weapons seem dangerous enough for Jason to stay on the retreat.

Mado then fakes a misstep, baits Jason closer, and activates his Quinque weapon so that it opens and attempts to clamp down on Jason. Jason activates his own kagune and breaks Mado’s weapon. Before he can cut him down, Amon lunges for a strike. Jason leaps away and checks the time. Two minutes has passed, which was as much time as he was willing to waste fighting.

At Anteiku, Hinami and her mother have a heartfelt moment together as they talk about the father and being able to see him soon. But at the hospital, Mado’s indiscriminate killing of ghouls extends to the father too, and he is cut down while trying to fight back.

A few things change in Tokyo Ghoul episode 6. Nishio starts working at Anteiku. He prefers not to have to kill to eat, but the guilt-free food requires him to take the job. Hide notices him right away, and feels that he sticks out. Then he worries that Nishio might be interested in Touka, but after hearing the denial wonders how she is doing. She hadn’t left her room since the incident in the church. In the corner, Hinami throws a temper tantrum, yells that she wants to live with her father, and runs upstairs. Kaneki tries to go after her, but she doesn’t answer her door.

Her mother says that things are getting stressful because she has to do all of the work, and Hinami wants to see her dad. Kaneki asks about him.

In his hospital, the father gives Jason the finished replacement wrench. Jason has his mask off now and is a burly, blonde man. Jason comments on the quality of the weapon. The father asks Jason to never come back, not because he doesn’t like him, but because he wants to live with his family in peace. Jason agrees, but then asks the father about his connection with humans and stabs him.

Back at Anteiku, the mother tells Kaneki that the father used to be involved in bad things in the 13th ward, but decided to stop when he had a family. She calls him a good man and goes to console her daughter.

The police examine the hospital scene in Tokyo Ghoul episode 6, along with Amon and Mado. Jason escaped, but they go over the father’s things and find the picture of him and his wife and daughter. They plan on using it as a lead.

On his way to Touka’s room, Kaneki notices Hinami and Ryouko, the mother, making amends in the hallway. He rings the doorbell, but she doesn’t answer at once. When she does, she brings up the fact that she couldn’t kill Kimi. Kaneki talks about Hinami and her mother’s relationship and how nice they are together. Then he brings up Nishio and Kimi. He is trying to make the point that ghouls are just like humans and that humans and ghouls can get along just fine. Finally, he apologises for bringing up Yoriko at the church without knowing anything about her. He leaves knowing that she may have been hurt in the past. However, judging by the look on her face, his speech seems to have gotten through to her.

He goes to Hinami’s room while she is writing, and she asks how Touka is doing, but he isn’t sure. After teaching her another word, her mom walks in and thanks him for his work. When he leaves, she claims to have learned all of the vocabularies in the book. Now she wants a new book to learn new words and surprise her father, and to also give him a book as a gift.

At the end of Tokyo Ghoul episode 6, Hinami and her mother walk home from the bookstore after getting another book. On their way back home, Hinami picks up her father’s scent and follows it. It leads to a trap set by the Doves. Her mother fights them off and sends her home.

All rights are reserved. All the content and images belong to their respective owner. We have all the rights to modify & edit any comment which is found to be spammy or abusive.